Their names were Buddy and Ralphie, and we had to let them go today; our two little Bichons who made our lives richer for the past 14 years.   They were not litter mates, but they were brothers – spent almost their whole lives together playing, sharing, fighting, getting into trouble, and then charming their way out of it.  If you have a brother you know.

This will not be a story about sad goodbyes; that story is too painful to tell, and anyone who has loved and been loved already knows whatever I might find to say about loss.  (continues below) 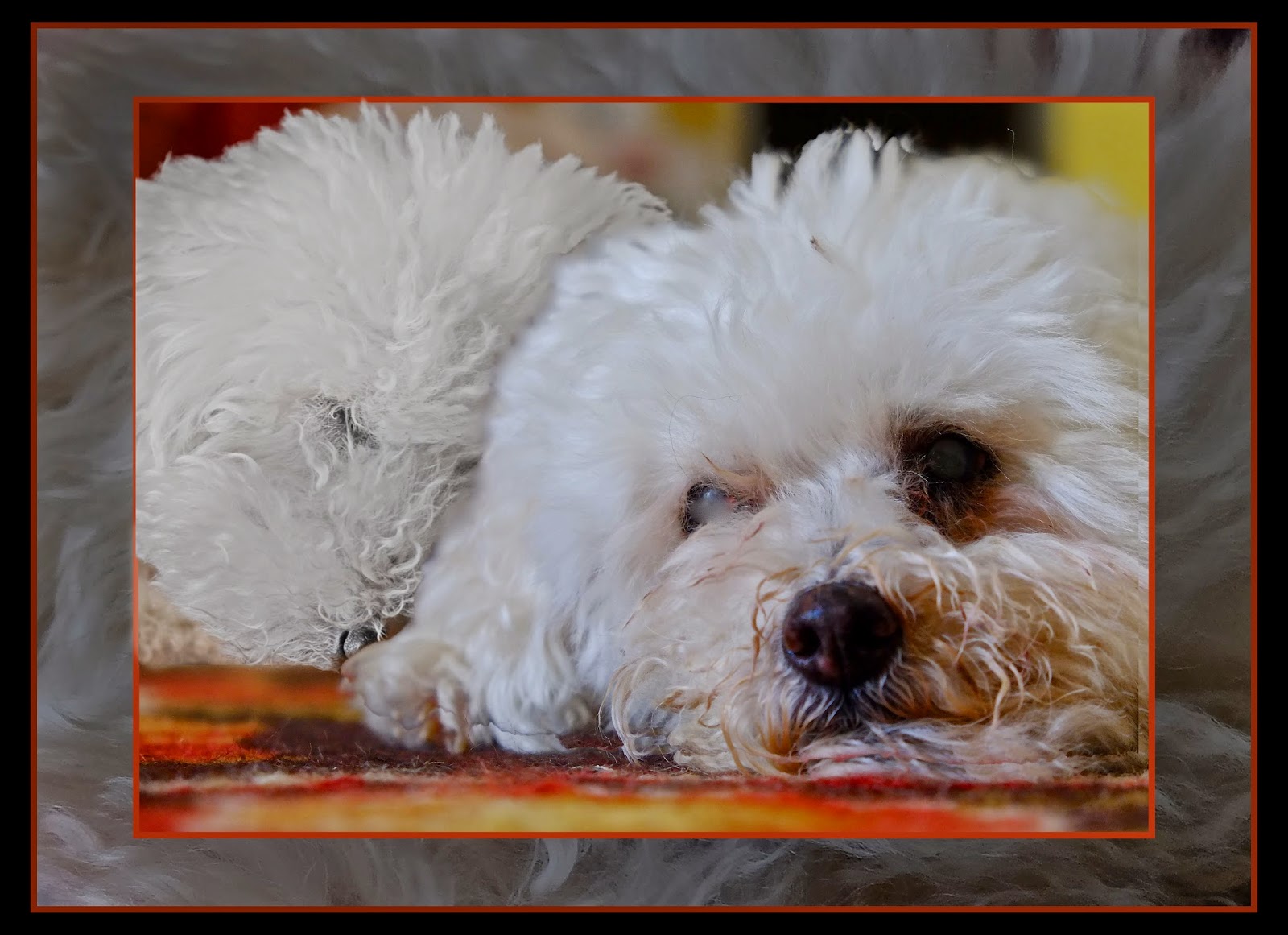 Buddy was beaten before we adopted him from a rescue in Florida; his real name was Milo, our sister-in-law called him Tripod because of his broken leg when we got him.   We named him Buddy, which gave way to Bud-man, Budweiser, Bud Budnick, Budski, Budacious Tatas,  Circus Dog (30 inch vertical leap), Mr. Bud, Bud-zooks, and Shithead when he got into the garbage.  He didn’t always come right away when called; imagine that.

Ralphie was neglected before we adopted him from the rescue.  His real name was Rusty, but he renamed himself by throwing up when we brought him home; Hurley was already taken by a city, and we knew neither grandma would call him Barfy, so Ralphie was next up.   He didn’t have as many other names - Forrest Gump because he was fast as lightning and not the sharpest biscuit in the bag, then Lieutenant Dan after he went through the prop of a boat and almost lost his legs, and Ka-Ching when I got the vet bill for that.

In these last years, Buddy went deaf, Ralphie went blind, both got senile and barked at imaginary things, and other health problems crept in - seizures, strokes, respiratory distress.   Unlike a retriever or herder, it is really hard to tell when a lap dog’s skills have diminished; they’re guys so they wouldn’t admit it, but I’m sure they lost that competitive napping edge.  But even to the end we were greeted home from every errand with two wagging tails and the ritual tossing of the toys – young at heart, and what other kind of young matters anyway.

In their healthy years, they would take up opposite ends of a couch, back seat, boat cushion, or bed; but in recent months they had taken to curling up together – they knew it was time before we allowed ourselves to admit it.   Theirs was a good life, and ours was made even better for having them in it; I’m glad they adopted us.

I'm so sad for you both. I know it was the best decision.... I'm sure the quiet of the house will take some time to get used to.... Your all in our thoughts. They picked 2 very good people to call their family.

Tears in my eyes, Tim and JoAnn. I know how you feel because we lost our little Bichon, Genie, four years ago at the age of 15. She, like Buddy and Ralphie, was the best and my life, like yours, was made better because of her.

I forgot you called him lieutenant Dan! What a smile and laugh that projected. Pets are family, maybe not humans but they still give you their heart, Unconditionally. Sad day indeed for my Florida family. My only family.

God only knows why their lifespan is so short. Maybe it's so we have those wagging tails to greet us when our time comes. Our hearts go out to you both.

I hadn't read this yet.... more tears for your pain of loosing them both. :(