Imagine this: two shad are swimming in the shallow water of the big pond they call a lake in Florida arguing about what is the fastest thing in the world.  One shad insists that the fastest thing is the bass and the other is adamant that the alligator gar is faster.  Sort of like my mullet buddies used to argue over Firebird versus Camaro after several beers, or I should say "POS Camaro" which must be the official long-form model name, since my son always includes the POS designation when referring to the one he had back in his pre-Mustang un-evolved state.

But back to the shad and their world....   As their argument gets more heated and the bass becomes "the POS bass" as they both are about to blow a gill arguing about something neither one knows anything about and then suddenly...BA-BAAM!   Some alien creature attacks from above the liquid atmosphere, narrowly avoiding the two tall walking sticks that moved into the neighborhood an hour or so ago.  Death in an instant to the shad yelling the loudest and least aware of his circumstances.

So the moral of the story is....um....ok, there isn't one.  Shad can't talk - I just made it up so I could use the photo and egrets strike really fast when they are fishing so it was close enough for this theme.

For the curious, the shutter speed is 1/1600 of a second and a middle range aperture to get a sharp image - this one is f8.   I focus-lock on the point where the birds legs meet the surface - that is the plane where the head is going to hit the water when the bird is perpendicular - the strike is too fast for my camera's focus tracking to keep up reliably.  Set for continuous shooting and hope for a good splash pattern going in and a shiny shad in the beak coming out.   No birds on sticks. 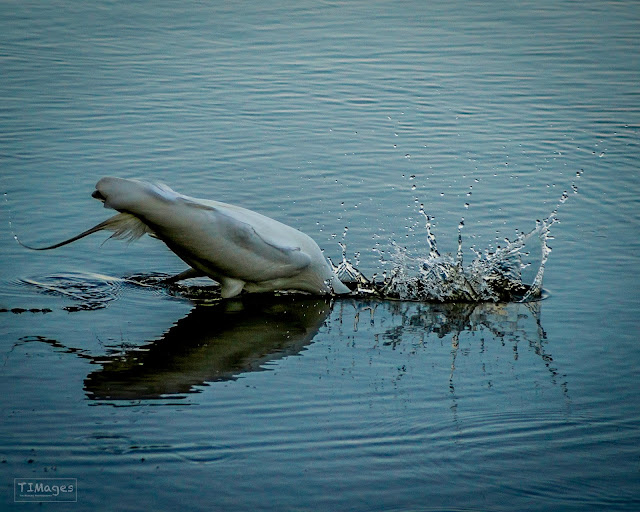